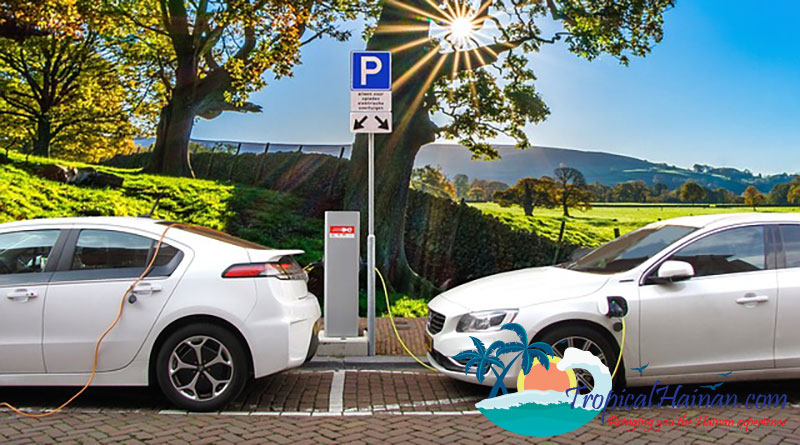 The provincial government offices administration said Wednesday that all government vehicles in Hainan, except cars providing special services, are scheduled to use clean energy by 2028.

The benefits of electric vehicles are numerous and well documented; less pollution therefore better for the environment, electric cars have fewer moving parts so need far less maintenance and the cost of electric travel is cheaper than petrol. Additionally, electricity prices are far more stable than petrol so it saves you money.

According to the administration, 10 percent of official cars in the province will use clean energy by 2020 and this is expected to increase to 70 percent by 2025.

While public interest in electric vehicles has increased sharply in the last year or two as the government moves to ban petrol and diesel cars, the switch to EVs by the general population will not be without its challenges.

For one thing, charging is seen as an issue, coupled with what’s been termed as “range anxiety.” While some people may be able to charge at home, if you live in an apartment block however this may not be so easy.

The French government announced recently that by 2022 they hope to multiply the number of new electric vehicles sold in France each year by five to get a total of 600,000 electric vehicles on the roads within the next four years.

To meet these objectives, they are setting aside a substantial budget of €300 million to develop infrastructure and maintain public incentives.

The most pressing priority has been acknowledged as expanding the network of charging stations on public roads and in residential estates. France currently has 22,000 public and 137,000 private (home and business) charging stations, and the French Ministry for the Ecological and Inclusive Transition plans to install 100,000 more, which will be made available to the public in 2022.

The infrastructure is improving, but it takes time.

Hainan province had 37,100 clean energy vehicles by the end of 2018, accounting for about 2.9 percent of the province’s total, among which 22,800 were NEVs and more than 4,500 charging facilities for electric cars have been built.

Most production electric cars on the market can only go about 160 kilometers on a single charge. Generally speaking, while people who live in cities like Haikou or Sanya typically drive less than 60 kilometers a day and could easily charge their cars overnight, electric cars still aren’t seen as useful for road trips. Not everyone is convinced electric vehicles are suitable for them.

let’s say for example, you drive 120 kilometers in a busy day and come home only to find out that there’s an unexpected emergency and you need to drive another 50 kilometres, what then? Not a problem if you have a conventional car. For consumers, thinking of situations like this causes a lot of hesitation and car makers still have a lot of convincing to do.

While in the last few years we have seen a sharp rise in availability of electric vehicles at the premium end of the market with companies like Tesla, mid price range cars are not easy to get your hands on.

In one of their latest press releases, Nissan remarked that since the launch in autumn last year, orders for the new 2018 LEAF have exceeded 35,000, with thousands of orders coming every month that far exceeds their production capacity. Additionally, prices for electric vehicles are not expected to be on par with conventional cars until 2025 or later.

Battery technology is expensive, and because batteries in electric cars need to be able to hold massive amounts of charge to make the cars practical for most drivers, they have to be built using expensive materials, most of which are difficult to procure. Because electric cars cost a lot to build, they also cost more than comparable petrol cars to buy.

Oslo is often referred to as the EV capital of the world. For the first time in history, more than half of all new cars sold in Oslo are electric.

In Oslo, more than 50% of new cars sold in 2017 were either fully battery electric (37.5%) or a plug-in hybrid (14.1%), according to the Norwegian Road Federation (OFV). For the first time since 2008 the number of available charging points per vehicle have dropped from one charger per four cars, to one charger per 10 cars creating challenges.

The city council recently decided to triple the deployment of new charging points bringing the ratio of chargers to cars to 1 : 3

In close cooperation with private companies, Oslo will build fast chargers in the corridors in and out of the city. A large network of semi-fast chargers (7.4-22 kW), with a higher charging speed and higher turnover of cars, is also being deployed. Other solutions include;

• The world’s first indoor parking for EVs only

• Congestion tax (not for EVs) (the whole city)

• Increased numbers of toll gates/road throughout the city, with free passage for EVs

Future adoption by the general population will depend on a lot of variables including the use green taxes, regulations and other incentives to encourage people to make the shift. Other factors will include future technological development of vehicles, batteries and chargers as well as cooperations involving government and private businesses.

Own an electric vehicle, have an opinion? let us know in the comments section below.