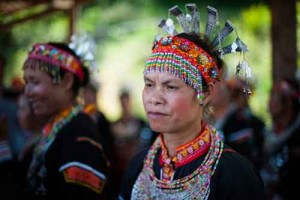 With a population close to 1.3 million spread across 5 tribes and a history dating back more than 3000 years, the Li people of Hainan are one of China’s 55 ethnic minority groups and they have a rich, colourful and very unique culture to share with the world. The village of Chubao, where the Li people have remained faithful to their ancient traditions and customs, lies to the west of Five Fingers Mountain. Here village life centres around agriculture, fishing and weaving just as it has done for countless generations. The land is rich with a subtropical climate and plenty of rainfall and tropical crops such as coconuts, mangos, bananas, pineapples, coffee and palm oil produce bountiful harvests.

Their distinctive houses resemble upside down boats and are made completely of materials gathered from the forest, there’s not a nail in sight. The roofs of straw are supported by tree trunks and the walls are of interwoven strips of bamboo coated with mud. They are designed to be cool in the heat of a tropical summer and strong enough to withstand the occasional tropical storm that blows in from the coast.

Weaving is an important part of Li culture. Historical records dating back 2000 years to the Han Dynasty mention the linen cloth made by Li women. In the late Song Dynasty (960 – 1279) their skills and techniques were so advanced that students came from all over the kingdom to study spinning, weaving, dyeing, and embroidering before spreading the knowledge to other parts of China. With hundreds of patterns and designs all inspired from nature and their daily lives Li cloth is instantly recognisable and internationally acclaimed. With the number of skilled weavers and embroiders declining rapidly in recent years, UNESCO has added Li minority weaving and embroidery to the list of Intangible heritages in need of urgent safeguarding.

The Li people have a love of life that’s evident through their music, songs and dancing. With no written language of their own their history and culture is passed from one generation to the next through song. Their famous Bamboo Dance is an energetic affair where bamboo poles lying parallel on the ground are opened and closed to a moderate rhythm and dancers nimbly leap from one end to the other and try to avoid being trapped by the closing poles. Other famous dances include the Spring Rice Dance and the Sword Dance. With more than thirty traditional flute, string and percussion instruments the accompanying music is rich and vibrant.

Traditionally the Li people were animists, they believed there were spirits in all things and they were guided in their spiritual affairs by shamans. Today, these practices are consigned to the past along with the tradition of tattooing the Li women. For centuries the tattoos of Li women were used to identify not only their tribe, family and social status but they also allowed them to be recognised by their ancestors after their death.

Young people today are no longer tattooed and only a diminishing number of old women carry the last traces of this once ancient tradition. As the older generation takes with it traditions from the dark and distant past the younger generation are confident that Li minority culture will have a bright and successful future.