This year’s 22nd typhoon “Rai” has formed, moving towards the southern Philippines 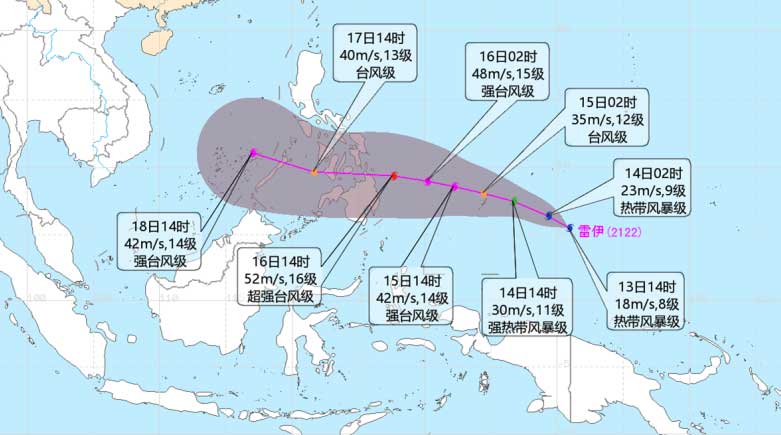 This year’s 22nd typhoon “Rai” has formed, moving towards the southern part of the Philippines

It is expected that typhoon Rai will travel at speeds of 15-20 kilometres per hour, moving northwest, gradually increasing in strength.

Due to different naming conventions, Rai will be known as Odette in the Philippines. The Philippine Atmospheric Geophysical and Astronomical Services Administration (PAGASA) will give the storm the name Odette once it enters its area of concern.

It is forecast that typhoon Rai, will gradually strengthen in the next few days, moving towards the southern Philippines and across the southern South China Sea, and the cloud belt associated with it will bring wet weather in the early to middle of next week.

According to the Medium-Range Weather Forecast, it is expected that Rai will move northwards after entering the South China Sea.

The observatory predicts that the typhoon will gradually intensify in the next few days, as it moves towards the southern part of the Philippines.

The waters over which Rai is expected to travel are sufficiently warm for further strengthening. A lack of strong wind shear in its path will also support the strengthening and maintenance of any tropical system.

According to the current path probability forecast map, Rai may intensify into a super typhoon on Thursday (16th).

It will weaken as it crosses the Philippines, but after entering the South China Sea, it is expected to strengthen into a strong typhoon.

Rai is expected to hit a peak intensity equivalent to a Category 2 hurricane on the Saffir-Simpson Hurricane Wind Scale (maximum sustained winds 96-110 mph or 154-177 km/h).