When typhoons hit, people batten down the hatches, hunker down and hope for the best. But what about birds? 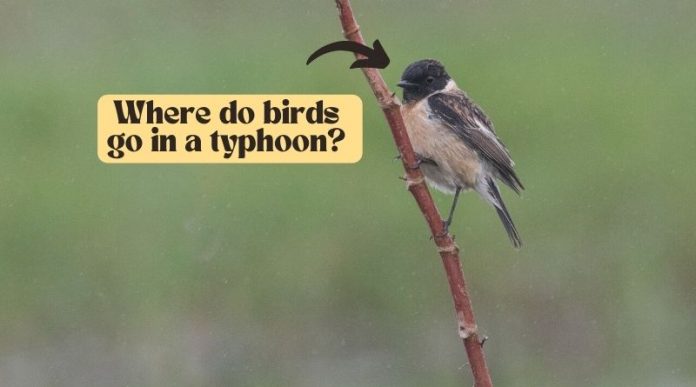 Birds are actually quite adept at surviving high winds and rain, (although flooding does take its toll as it can wash away both habitat and food supply), it’s worth bearing in mind, birds have had approximately 60 million years to figure it out.

Basically, birds have a variety of strategies available to them for dealing with large storms, such as typhoons, including leaving the area, flying ahead of the storm, (or surprisingly) flying into the storm, and even sheltering in place.

Some birds will leave in advance of an approaching typhoon.

Research has shown that birds are sensitive to barometric pressure so they know when a storm is on its way – especially when the storm is as large and as powerful as a typhoon.

Research has found that sparrows speed up their autumnal migratory departure date in response to falling barometric pressures.

Birds may fly ahead of, into, or through a storm.

Birds detected within the eye of Category 4 Hurricane Laura as it makes landfall.

According to Pliie, “those are actual birds detected in the eye of Laura as it made landfall near Cameron Louisiana.”

In 2011, a satellite tagged whimbrel, named Hope, flew into Tropical Storm Gert off the coast of Nova Scotia, Canada.

Incredibly, she endured strong headwinds for 27 hours straight, and was able to fly at an average speed of only 7 miles per hour (11kph).

In contrast, after she successfully emerged from the middle of that storm, she then was pushed by strong tailwinds at an average speed of 90 miles per hour (145kph) and safely returned to her staging grounds on Cape Cod.

Pelicans are especially powerful and are one of the birds that are more adapted to dealing with large scale storms and typhoons. According to Carolyn Atherton, Audubon Zoo‘s Curator of Birds, “they are strong enough to out fly them and smart enough to stay in the centre.”

Other small migratory bird species may become trapped inside typhoons, as was most likely the situation for these gulls.

Radar images of Hurricane Matthew as it raged across Florida in 2016 showed it had a huge flock of birds trapped in its eye.

Birds may shelter in place and hang on for dear life

Many non-migratory birds will seek shelter inside thick bushes or on the leeward side of trees.

Birds buffeted by strong winds may seem like they’re clutching a branch or wire for dear life but holding on is easy for birds.

Their natural resting position is to have their talons closed and locked, and their feet will only release if the bird uses its muscles.

This gives birds a powerful grip to hold on to a perch, even in the strongest winds.

Since birds have adapted to sleeping whilst perched, their feet automatically close tightly when they are relaxed or asleep, thereby making it easier for birds to hang on to something solid for dear life.

Despite these survival strategies and adaptations, however, storms can still be deadly to birds, and many wild birds die during severe weather.

Storms that impact nesting areas are especially devastating, as birds may not be able to re-nest during the same season.

During a particularly bad typhoon season this can lead to dramatically diminished breeding success and reduced populations, especially for non-migratory birds.

Related article: Do not crush the Paederus (Rove Beetle)

Hainan launches center for the study and protection of gibbons in...