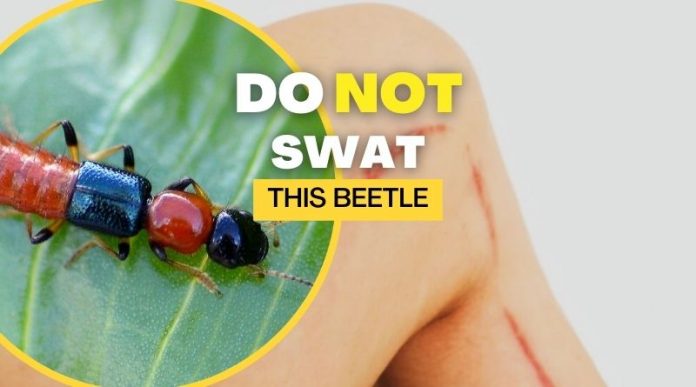 Paederus are small beetles with narrow bodies, ranging from 0.5–1.5 cm.

They tend to have a shiny black head and thorax, with blue or black elytra (forewing), and an orange-red abdomen and are commonly known as “rove beetles.”

This beetle does not bite or sting, but accidental brushing against or crushing the beetle over the skin provokes the release of its coelomic fluid, which contains paederin, a potent vesicant (toxic blister) agent.

At least 20 of the more than 600 species of Paederus have been associated with Paederus dermatitis.

Paederus dermatitis is caused when a pederin-containing beetle is crushed, even partially, against the skin.

This skin irritation is also called “dermatitis linearis” or “linear dermatitis” because one can inadvertently drag a beetle across the skin in a more-or-less straight line when trying to brush it away.

The resulting inflammation will also be linear.

Once pederin is on the skin from the initial beetle contact, it may also be spread elsewhere on the skin. “Kissing lesions” or mirror-image” lesions where two skin areas come in contact (for example, the elbow flexure) are often seen.

Washing the hands and skin with soap and water is strongly recommended if contact with a rove beetle has occurred.

Initial skin contact with pederin shows no immediate result. Within 12–36 hours, however, a reddish rash appears, which develops into blisters. Irritation, including crusting and scaling, may last from two to three weeks.

Because Paederus species are widely dispersed around the world, this syndrome has many different local nicknames including “whiplash dermatitis”, “spider lick”, and “Nairobi fly dermatitis”. In East Africa, conjunctivitis from getting pederin in the eye is called “Nairobi eye.”

Skin reactions to the beetles, called Ch’ing yao ch’ung, were described in China as early as AD 739.

Most cases of dermatitis have involved tropical species.

Rubbing the eyes with beetle fluid or contaminated hands can cause pain, marked swelling of the eyelids and conjunctivae, excessive lacrimation, clouding of the cornea, and inflammation of the iris.

Such ocular lesions seen in East Africa have been called Nairobi eye. Although eye involvement often is very irritating, permanent damage is not common.

Rove beetles live in vegetable debris and under stones and other materials, such as leaf litter. They are most abundant in areas of moist soil, such as irrigated fields and other crop lands, where the adult beetles feed on various herbivorous insects. Consequently, agricultural workers and others working in fields and grassy areas are often affected.

Because the beetles are attracted to lights, people occupying lighted dwellings in tropical areas are also commonly affected with what has been called night burn.

Related article: Look out, look out, the thrips are about!