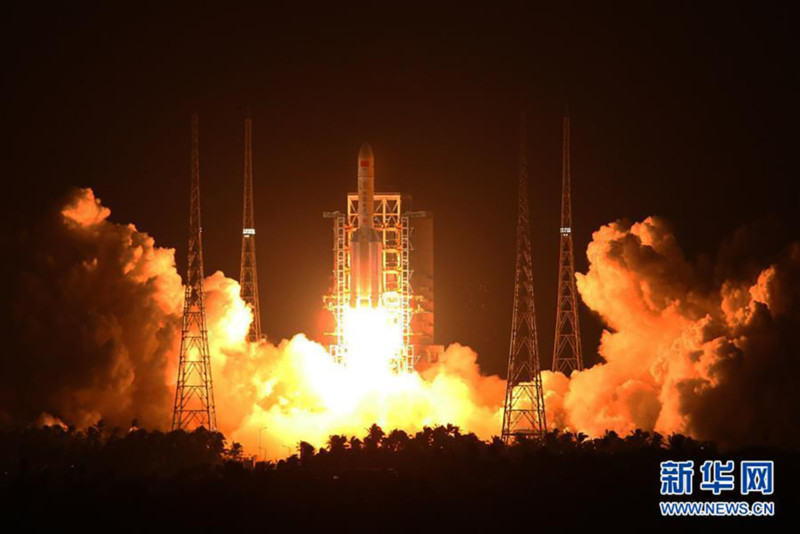 The Wenchang Space Launch Site is located in Longlou Town, Wenchang, Hainan. It is China’s first open coastal space launch base and one of the few low-latitude launch sites in the world (19 degrees north of the equator).

The Wenchang Spacecraft Launch Site was formerly a test base for China to launch suborbital rockets, later it was approved by the State Council and the Central Military Commission to build China’s first coastal launch site.

Construction of the Wenchang Spacecraft Launch Site began on September 14, 2009 and it was completed on October 2014.

As the earth’s equator has the fastest rotational speed over other latitudes, launching a rocket here will have a greater velocity which in turn reduces the fuel needed to launch.

Interesting to note, as the earth rotates eastward, only launches in this direction can take advantage of the extra velocity. Launches heading Westward (against the earth’s rotation) are more difficult as they are counteracting the earths spin.

Ease of transport and safety

The site for the launch center wasn’t chosen only for its lower latitude velocity boost but safety and transportation were also in mind.

Situated along the coastline, the ocean acts as a landing net for any misadventures or falling debris.

Generally, large rocket parts and equipment are transported by rail however the boosters for the Long March 5 rocket are too large to transport by train, so Wenchang uses its port for these deliveries.

Interesting note: Geosynchronous orbit satellites have an earth-centered orbit with an orbital period that matches the Earth’s rotation on its axis, 23 hours, 56 minutes, and 4 seconds (one sidereal day).

The Long March 7 carrier rocket blasted off from Wenchang Spacecraft Launch Center at 20:00 on June 25, 2016.

About 603 seconds later, the payload assembly separated from the rocket, entering an elliptical orbit with a perigee of 200 km and an apogee of 394 km. The first successful launch of the March-7 carrier rocket had taken place.

Note: The Moon’s orbit around Earth is elliptical. The point of the orbit closest to Earth is called perigee, while the point farthest from Earth is known as apogee.

Long March 7 is a new type of liquid fuel carrier rocket developed by the China Academy of Launch Vehicle Technology.

It comes in two variants namely the CZ-5 and the CZ-5B. It has a payload of up to 25,000kg dependent on the mission.

A planned future launch vehicle variant of the Long March 8 will be partially reusable by featuring a combined booster recovery of the first stage and the boosters as a single unit.

The maiden flight of the Long March 8 was launched on 22 December 2020 from the Wenchang Spacecraft Launch Site.

The launch mission was aborted due to an instantaneous drop in engine thrust.

The mission was aborted when the rocket failed to follow its intended trajectory into space.

Where to see a rocket launch in Hainan

Covering an area of 201 mu, Qiaotou park parking lot can hold 293 cars and 10 buses. It can hold around 4,000 spectators.
Address: The west side of Qinglan Bridge, Wenchang文昌市清澜大桥西侧

The science center parking lot can accommodate 674 cars, 70 buses, during launches it will admit up to 3,000 people.
Address: Coastal tourist road east suburb, the junction of Longlou, Wenchang文昌市滨海旅游公路东郊、龙楼交界处

As the crow flies this is the closest viewing place to the rocket launch site. It can accommodate around 800 people.
Address: Tongguling Nature Reserve 文昌市铜鼓岭自然保护区

Covering an area of 50 acres, it can take around 4000 people to watch the launches.
Addess: No.28 Ziwei Road, Longlou Town, Wenchang 文昌市龙楼镇紫薇路28号

Covering an area of 15 mu, it can accommodate around1500 people.
Address: The west side of Stone Park in Longlou Town, Wenchang 文昌市龙楼镇石头公园西侧

The parking lot can accommodate 400 cars, 10 minibuses and 5 buses, and is expected to accommodate 2,000 people.
Address: The west side of Stone Park in Longlou Town, Wenchang 文昌市龙楼镇石头公园西侧

Related article: China on the Moon, a History of Chinese Lunar Missions in Pictures