A day in the life of Wu Mingju: Coconut carving master in Old Town Haikou 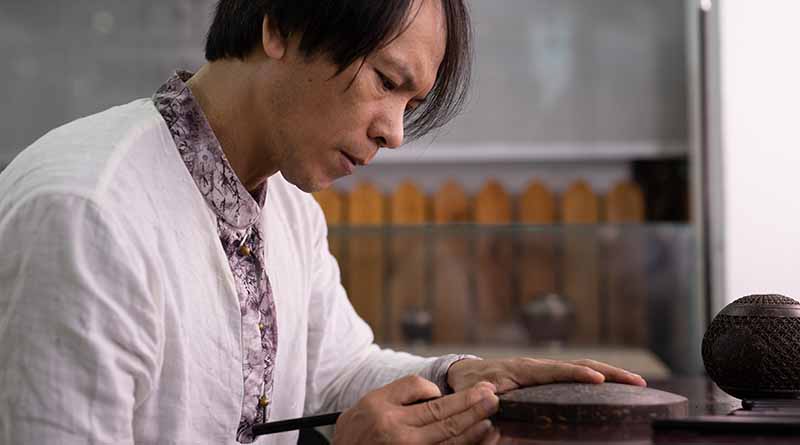 This week we met with master coconut carver Mr Wu Mingju in Haikou to learn more about his daily life and coconut carving.

At quite a young age Mr Wu began to learn traditional style Chinese paintings, he was first influenced to take up the brush by one of his father’s friends.

When he was 16 years old, each morning as he would walk to high school he would pass a coconut carving workshop.

One day, out of curiosity he went inside for a look. It was the first time he saw carvings made from coconut shells.

He met with one of the coconut carvers who was kind enough to allow him to borrow two carving knives and a coconut shell to take back home.

When he arrived home, he drew a Kylin (Chinese dragon) on the coconut shell and then carved it into the shell using the knives.

The next day, Wu brought his finished carving back to the workshop, the master was very surprised at his first attempt and decided to teach Wu the art of coconut carving.

Wu has now been practicing the art of coconut shell carving for more than 20 years.

He has opened exhibition shop in Qilou Old Street in Haikou, where he displays his works.

He told us that “every work has different material requirements, the older coconut shells will be darker in color and harder in texture, more tender shells will be lighter”.

Older coconut shells are more commonly used amongst carvers. The density of older shells is much higher and easier for carving. If you take care of the coconut carving properly, it will last for a long time.

Today, there are coconut shell carvings from the Ming and Qing Dynasties housed in the Imperial Palace, Beijing.

It takes around 3- 4 hours to make a simple carving such as a small pendant. If it is only made by hand with a carving knife, it will take a little longer.

Wu holds a couple of free training seminars in the shop each year, mainly to teach the theory and practical operations of production.

The classes only last for a few hours but they are a good insight into the world of coconut carving.

”I hope to keep this tradition alive. If I meet students who are dedicated to learning the skill of carving and maintaining the tradition, I am happy to teach one-on-one.” Wu Mingju said.

Related article: A day in the life of Gary: Expert in Kong Fu and performance and director at Haikou Movie Town