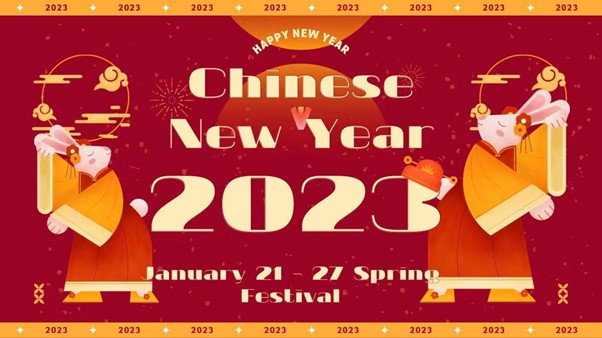 Spring Festival, also known as the Lunar New Year and even more commonly known as Chinese New Year is a time for celebration across China and it is the largest holiday of the year. Observed by billions of people around the world, Spring Festival is marked by themes of reunion and hope.

Although China today uses the Gregorian calendar for civil purposes, the traditional Chinese lunar calendar governs holidays—such as the Chinese New Year and Lantern Festival, which according to some estimates, may have been in use from as early as the 21st century B.C.E.

During Spring Festival, the whole country holds a variety of activities to celebrate the New Year and it’s one of the largest migrations of people on the planet, with many Chinese travelling across the country to be reunited with their families.

For the 2019 Spring Festival travel season, a total of 2.99 billion trips were estimated to have taken place, and with the end of COVID restrictions, 2023 is shaping up to be busy.

More than 5.2 million passengers are expected to travel via two major airports in Hainan during the Spring Festival travel rush, (also known as “chunyun”) which started on Saturday and lasts for 40 days from Jan. 7 to Feb 15.

For Chinese people, Spring Festival lasts for 40 days and includes numerous smaller festivals. The New Year celebration itself is a seven-day-long state holiday, and on the eve of the new year, Chinese families traditionally celebrate with a large family reunion meal.

Considered the most important meal of the year, it is traditionally held in the house of the most senior family member.

When is Chinese New Year?

In ancient times, people started to prepare for New Year from December 23 or 24 on the Lunar calendar, and the New Year holiday would end 3 weeks later on January 19.

Nowadays, Spring Festival is celebrated from January 1 to January 15 on the Lunar calendar.

Each year on the Chinese Zodiac is represented by a different animal.

Legend has it that a god beckoned all animals to bid him farewell before his departure from Earth. Only 12 of them, namely the rat, ox, tiger, rabbit, dragon, snake, horse, goat, monkey, rooster, dog and pig arrived, with each given a place of honour in a year based on the order of arrival.

Last year 2022 was the year of the tiger which is the third animal on the Zodiac cycle and each animal is associated with different personality traits.

During Spring Festival, various kinds of traditional activities take place and many regions across China will have differences in the way they celebrate.

During the festival many families will visit temples to send blessings to their ancestors.

It is broadcast annually on the eve of Chinese New Year on flagship CCTV-1 and internationally through the China Global Television Network.

In 2018 the Spring Festival Gala had an audience of one billion viewers and has also made an appearance in the Guinness World Records as the most-watched television programme.

Giving red envelopes (Hongbao 红包) is a common practice over Spring Festival time. The packets are usually stuffed with money and are given out by grandparents and married couples to young children or unmarried relatives.

Nowadays people will send an E-Hongbao through the messaging APP ‘Wechat’. Sending of these traditional packets online has become increasingly popular in recent years. According to Statista 688 million were sent and received in 2018 and 823 million in 2019.

The colour red stands for good fortune and prosperity for the New Year and it is said to ward off evil spirits.

Generally, crisp notes fresh from the cash machine are used and handed out in red envelopes, and there are no set guidelines as to how much to put inside although some numbers are lucky, and some can even mean death!

Giving any number that is a multiple of the number eight is always good in China as eight is considered a lucky number. The number four is a no go, as in Chinese, “si“（四） means four, however using different tones can also mean death (死). Some people believe that it is also bad luck to live on the 4th floor of an apartment building.

When giving and receiving a red envelope it is best to do so holding the packet with both hands. It is also considered bad style to open the envelope straight away. It’s best to wait until you get home!

Lantern Festival marks the final day of the Chinese New Year Celebrations. It is the day when people go out and light paper lanterns sending them into the night sky with their good wishes and blessings for the New Year.

Chinese people believe that the round shape of the balls symbolise family togetherness and eating this glutinous snack will bring families harmony, happiness and luck in the New Year.

This year Lantern Festival lands on February 5th, 2023 and the celebrations usually take place in public parks across Hainan.

Dragon and lion dances are also common during Spring Festival. It is believed that the loud beats of the drum and deafening sounds of the cymbals together with the face of the dragon or lion dancing aggressively can ward off evil spirits.

Lions usually come across as playful, curious creatures with a penchant for mischief, whereas dragons are quick, powerful, and flowing.

Lion and dragon dances are generally performed at festivals to bring good luck and chase off evil spirits. The lion is said to bring prosperity, wisdom and good luck for the upcoming year.

Lions will have two performers inside a costume while dragons require many performers to manipulate the bodies, usually held up by poles. Odd numbers are considered auspicious in China so look for dragons with 9, 11, 13 or 15 performers.

There are many differences between provinces and cities, each has its own regional characteristics.

Brush away the dust

In Hainan, there are many different customs. In Qionghai, on December 23 and 24 of the Lunar calendar, it is “Sweeping the Dust” day, which means “clearing away the old and ushering in the new”.

Out with the old

Every family in the villages and towns would take a few old things outside to set them on fire, which is called “Sending away the poor”. Send away the old things in return for good luck in the New Year.

A popular holiday activity in Wenchang and some places would be to make rice candy or peanut candy for the whole festival month, not just to eat at home but also to give away as gifts.

In some places across the island, people like to pay a visit to their family and friends on the first or second day of the Festival, but there are some other places say that its bad luck to visit on the first day.

In Hainan, locals will also steam fish on New Year’s Eve. Although the fish isn’t eaten, it is stored for a few days as an offering to ancestors.

Hainanese people will also cook and eat the biggest chicken they can find. This is to celebrate last year’s harvest and to let their ancestors know next year’s will be greater.

When visiting others, people will generally bring oranges or tangerines when they pay a visit. The words for tangerine and orange in Chinese are similar to the words for luck and success hence the fruits would bring luck.