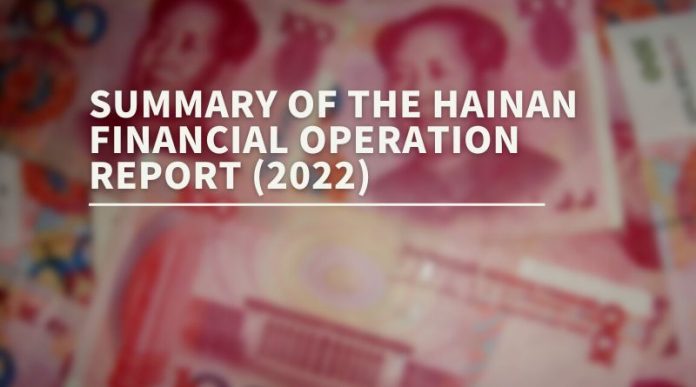 From the perspective of economic operations, the economic development is stable and improving, better than expected.

First, a combination of higher growth, lower inflation and more employment has been achieved.

The investment structure has continued to be optimized, with industrial investment increasing by 33.5%, of which manufacturing investment increased by 84.2%, “Shenhai No. 1” was put into operation, offshore wind power, Changjiang Nuclear Power Phase II and other projects have started.

Consumption has been improved and upgraded, and the first China International Consumer Goods Fair has been successfully held, which has become the largest consumer boutique exhibition in the Asia-Pacific region.

The total sales of outlying island duty-free shops throughout the year were 60.17 billion yuan, a year-on-year increase of 84%. The export-oriented economy continued to grow at a high rate, the province’s economic export degree increased by 7.1 percentage points, the actual utilization of foreign capital increased by 16.2%, and trade in goods exceeded 100 billion yuan for the first time.

Second, achievements of the scientific and technological innovation turnaround campaign are beginning to emerge.

Twelve new technology innovation platforms in the three major industries of “land, sea and air” have been established, the headquarters of China Seed Group has successfully settled in Hainan, and Yazhou Bay Science and Technology City has become a gathering place for scientific research institutions and business entities in China’s seed industry.

The “Hainan Free Trade Port Law of the People’s Republic of China” was promulgated and implemented, along with special measures to relax market access, several measures for trade liberalization and facilitation, and financial support for Hainan’s comprehensive deepening of reform and opening up.

The “four beams and eight pillars” policy framework system has been established. The key core policies of the Free Trade Port have begun to show results, with policies such as processing value-added tariff-free, cross-border e-commerce export to overseas warehouses, 15% income tax and zero customs etc.

Preferential policies such as the “tax” list were implemented in an orderly manner, the “first-line” liberalization and the “second-line” control system were extended to the two comprehensive bonded zones in Haikou.

Fourth, new breakthroughs were made in the construction of ecological civilization.

The proportion of days with good air quality throughout the year reached 99.4%, the concentration of fine particulate matter (PM2.5) was 13 micrograms per cubic meter, and the ozone concentration has remained at a low value in recent years.

Fifth, the coordinated development of regions has opened a new chapter, and the urban and rural appearance and governance level have been significantly improved.

The integration of Danzhou and Yangpu was officially implemented, the spatial planning of the Xinying Bay area was accelerated, and the coordinated development strategy of the free trade port area has successfully taken the first step.

A special campaign for planting grass and greening on bare land in rural areas has been carried out, with a completion rate of 95.8%.

Sixth, people’s livelihood and social undertakings have made great progress.

The relief of 13,000 urban workers in difficulties has been completed. There were 117,000 new rural labour transfer jobs, the growth rate of wage income increased by 4.9 percentage points, and the per capita disposable income of rural residents increased by 11%.

The pilot reform of public hospitals has been advanced in an orderly manner, and the direct settlement of outpatient expenses across provinces has been fully realized.

From the perspective of financial operations, financial development is stable and progress has been made.

First, the financial reform and innovation of the Hainan Free Trade Port is booming.

The “five-in-one” financial development pattern of finance and science and technology innovation has taken shape.

Farmers loan balance of 32.5 billion yuan, an increase of 11% over the previous period.

The province’s annual foreign-related revenue and expenditure volume totalled 38.1 billion US dollars, an increase of 1.03 times over the same period last year.

Cross-border payment in RMB was 55.86 billion Yuan, a year-on-year increase of nearly 50%.

Banking institutions have issued a total of 21 billion yuan of loans to high-tech enterprises in the province.

Third, the two-way opening of the financial sector has been carried out in a steady and orderly manner.

The scale of FT account business has greatly expanded.

In 2021, the account balance of free trade was 155.76 billion yuan, 3.1 times that of 2020. The pilot program to facilitate trade and foreign exchange payments continued to expand and increase efficiency.

The number of pilot banks and enterprises within the jurisdiction has increased from 1 and 5 to 3 and 16 respectively, and a total of 521 pilot businesses have been handled, totalling US$150 million.

New offshore international trade has developed rapidly, and the scale of offshore resale transactions in the whole year was US$7.48 billion.

The degree of facilitation of cross-border investment and financing has been significantly improved.

21 enterprises have registered for one-time foreign debts, with a total registered amount of US$6.4 billion, and the scale of cross-border transfer of bank credit assets has exceeded US$800 million.

45 QFLP funds were launched, with cross-border capital inflow of US$770 million; 37 enterprises piloted QDLP, and a total of US$5 billion of overseas investment quota was approved.

Fourth, the financial and business environment of the free trade port has been further improved.

Enterprise account opening services have been optimised and banks in the province have been encouraged to open the bank account business reservation function on the “Hainan e-registration platform”, so that all bank personal and enterprise simple accounts can be opened immediately.

We will further promote the construction of the rural credit system in Hainan Province.

By the end of 2021, the information collection and initial credit rating of 205,000 rural households and 108 administrative villages had been completed.

Fifth, create a “Hainan model” for the pilot of digital renminbi.

The year 2022 is a crucial year for the construction of Hainan Free Trade Port and the preparations for customs closure.

Doing good financial work throughout the year is not only an important economic task, but also a serious political task, which is of great significance and responsibility.

With the accelerated implementation of free trade port policies, the endogenous driving force of Hainan’s economic development has continued to increase, and it is in the best period of opportunity in its history.

However, the world is still under the impact of the epidemic of the century, and the external environment has become more complex, severe and uncertain.

A large amount of structural contradictions facing Hainan’s economic and financial progress toward high quality exist. In the face of opportunities and challenges, under the strong leadership of the Hainan Provincial Party Committee and the Provincial Government, in 2022, Hainan Province will fully, implement the new development concept, strive for progress, work hard, and promote Hainan’s comprehensive deepening of reform and opening up and free trade with Chinese characteristics.

The construction of the port has reached a new level; the province’s financial system will conscientiously implement the requirements of a prudent monetary policy that is flexible and appropriate, focus on the closure of customs operations in 2025, comprehensively deepen financial reform and opening up, accelerate the construction of a new financial development pattern for the Hainan Free Trade Port, and promote the Hainan financial strategic transformation, serving high-quality economic and social development and the construction of the free trade port, and welcome the successful convening of the 20th National Congress of the Communist Party of China with excellent results.