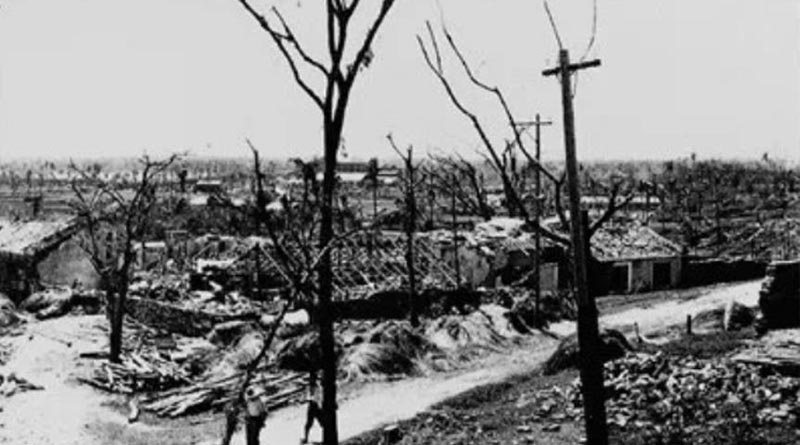 For Qionghai, September 14th, 1973, is an unforgettable day.

The super typhoon “Maqi” the 14th of that year swept in from the sea almost completely destroyed Jiaji and several nearby towns. The disaster caused 903 deaths and 5,759 injuries in Hainan. In Qionghai alone, 771 people died, 100,000 houses collapsed, and 110,000 partially collapsed.

Online reports state that on September 13, 1973, the weather was hotter than usual, but no one connected the hot weather with the typhoon. During the evening the weather turned a little cooler than normal.

“The weather forecast for the day said there would be a typhoon but no one believed it would be a disaster”.

Chen Jin’ai, former director of the Party History Office of Qionghai City, said he still remembered that it was just after the Mid-Autumn Festival, a bright moon was in the sky and the night was clear. That night the county cinema was showing the North Korean film “Flower Girl”, and many people went to see it. After watching the movie, some people stayed up and relaxed under a big tree.

He recalled that, several teachers from Jiaji Middle School were chatting, one of them looked at the moon in the sky and laughed at the weather forecast from the Meteorological Bureau: “This kind of weather will have a typhoon? What a big joke.”

More than 30 years ago, due to technical equipment and forecasting methods of the day, forecasting for typhoons and other meteorological disasters cannot be compared with today.

Because of frequent inaccuracy of reporting, people’s trust in weather forecasts was naturally not very high back then. Although the forecast was made that day, it was still not very accurate, and there wasn’t much warning.

Huang Xinqiu, former surgeon for Qionghai City People’s Hospital, happened to be on duty that night.

He said that because there was not enough warning or sufficient precautions taken, the rescue work was very passive. The wind began to rise at around 2 am in the morning and was strongest at 4 am in the morning. The wooden operating room of the hospital collapsed, and medical equipment and medicines were buried.

Later, the injured arrived in batches, and they could only provide basic treatment. “Some of the wounded could have been saved, but they could only watch them die. I felt very uncomfortable.”

According to online reports, on September 13th, 1973, a weather forecast was made in a local newspaper which reported: “September 14 wind force 7 to 8”. When in reality the typhoon had a wind force over level 18.

As for what caused the insufficient forecast, it is difficult to get an accurate answer.

In 1973 Hainan, the fastest way to broadcast emergency messages was by radio.

Many people in Qionghai recalled that from 10 pm to 11 pm that night, typhoon forecasts were continuously broadcast on the radio, saying that the wind force was above 12. Unfortunately not every household had a radio, and for many of those that did, they had tuned into popular dramas.

But by then it was too late.

When the typhoon hit, the roofs of many houses were lifted away by the wind and many of the walls also collapsed on occupants.

In an assessment report, by the Central Meteorological Bureau, the wind speed near the center of the typhoon at the time of landfall was 60 meters per second. There are also reports that the wind speed reached 73 m/s on landing.

Having lived and worked in Hainan through many typhoon seasons, we’ve all seen the news reports “Typhoon is coming” which usually causes panic buying at supermarkets, fishing boats to moor and many work locations to close.

More often than not, we later find that it was a gust of wind that fluttered a few leaves around in the air and didn’t have much effect on our daily lives.

In many cases, residents in bigger cities that work and live in modern buildings, are relatively safe, even when larger typhoons pass through.

However many locals in Hainan make a living from the ocean and live along the coastlines, which, when smaller typhoons and strong gusts visit the island, coastal towns and villages can turn dangerous. What may be considered just a strong gust of wind on land can have a deadly effect on a small fishing boat out at sea.

This is why many of the boats come into moor and ferry services will be suspended.

According to statistics, a total of 149 typhoons landed on Hainan Island from 1949 to 2013. Wenchang is the area with the most frequent typhoon landings on Hainan Island, reaching 46.

Media outlets will report on typhoons regardless of their size. They will also report days in advance, giving residents enough time to safely prepare and for fishing boats to make it back to land.

Generally, weather warnings across the island err on the side of caution as typhoons are unpredictable, they can weaken, intensify, change course or fade away completely whilst on route to Hainan Island.

Related article: Why exactly is it so important to protect Hainan’s rainforests?