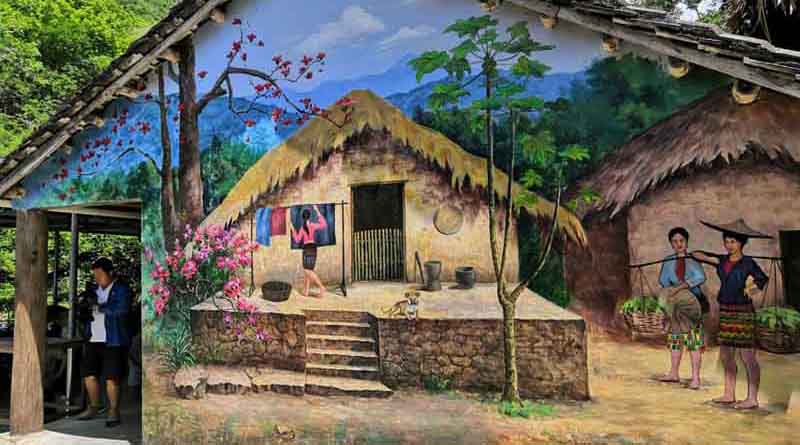 Wangxia, a mountain-locked town in the Changjiang Li autonomous county, is becoming an increasingly popular tourism destination as ecotourism development unveils the unique charms and local resources of the Li culture.

A five hours’ drive southwest of Haikou, Wangxia is located in the hinterland of the 1,495-meter-high Bawangling Mountain, a national nature reserve and is believed to be the earliest place of residence of the Li people, the original inhabitants of tropical Hainan Island.

Having moved from the southern Chinese mainland over 3,000 years ago, the Hainan Li people, now numbering about 1.49 million, distinguish themselves with their diversified culture including totem worship of animals and plants, low-thatched cottages in inverted boat shapes and the colourful Li brocades, known as a “living fossils” in China’s textile history.

The Li brocades are listed as a UN intangible cultural heritage, according to an introduction at the Changjiang Culture Centre.

Wangxia was named a national base for innovative practices to turn the green mountains and blue rivers into “golden and silver mountains “in late 2018.

Since then, the Changjiang county government has developed a cultural tourism project called “Lihuali” that highlights an immersive experience of the Li culture, its original ecological attractions and earliest human traditions, according to Huang Jincheng, Party secretary of Changjiang.

“We are turning the Li villagers’ lifestyles into tourism products and transforming their living environment to produce a unique feeling of cultural nostalgia,” said Lin Qing, a local official and general planner of the Lihuali project.

During his two hiking visits to Wangxia nearly 90 years ago, German ethnologist and anthropologist Hans Stubel (1885-1961) was captivated by the lush landscapes, diverse species, historical remains, religion and colourful lifestyles of the musical Li people.

His book, Ethnography of Hainan Island, is still regarded as key to the research and study of the Li ethnic group by international anthropologists.

Its remote location has kept life in Wangxia backward for centuries, according to township officials.

“Since 2011, the county government has invested tens of millions of yuan to build roads, drinking water pipelines, sewage treatment projects and other network infrastructure such as communication optical cables that now cover all villages in Wangxia,” said Yang Ronghui, head of the township, which has 3,248 residents.

He said solid integration of continuing anti-poverty efforts with moves to develop ecological and cultural tourism has given the once mountain-locked villages a new look.

“The villagers have begun playing multiple roles,” Yang explained. “When tourists come, they are performers of Li songs and dances, chefs of Li dishes, part-time housekeepers of Li home stays, or salesmen of handicrafts and farm produce such as cowhide stools, Li brocades, rattan weaving and millet pepper.”

Liu Guifang, a Li villager, said her people were once shy when it came to interacting with outsiders.

“If one unfortunately got seriously ill, his family had to pay their neighbours a sum of money to help send him to the hospital down narrow zigzagging mountain trails.

The amount that had to be paid was determined by the body weight of the ill person, and usually the price was about 10 yuan for each kilogram,” Liu said.

Fu Jianxiong, a once a poverty-stricken farmer, earned more than 50,000 yuan last year.

“With good roads and online shops so easy to manage at home, we no longer worry about sales of our products. In the past, our farm produce often rotted in the fields because there were no roads,” he said.

Huang, the Party chief of Changjiang said, “We are happy to see that Wangxia’s villagers’ houses are becoming home stays and the Li villagers are becoming local artists and performers.”

He said Wangxia will continue to transform and develop sustainable ecotourism to attract tourists in the future.