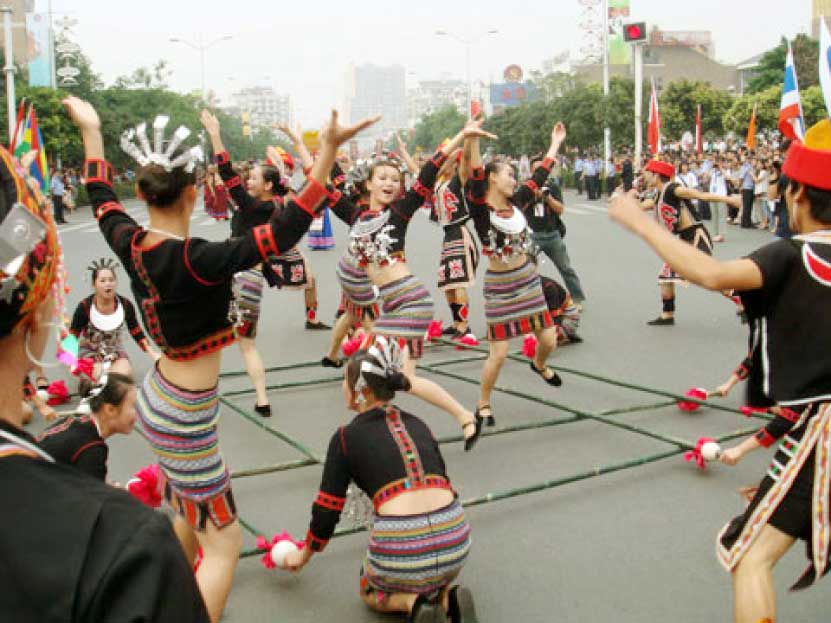 The Firewood Chopping dance is one of the oldest and most popular types of dance in the history of the Li Minority, called "Zhuancha" in the Li's language. It originated from a funeral custom in ancient Yazhou City (today's Sanya City).

It is a dance used by the ancient Li people to protect the body after someone dies, to drive beasts away, to help someone get over a shock and to worship their ancestors. Now it has become a leisure and entertainment presentation representing a unique part of the Li culture, and has achieved world-wide fame, long praised by people from other countries as the “world's rarely seen calisthenics”.

On 2nd June, 2006, the Firewood Chopping dance was officially inscribed into the list of National Intangible Heritage.

On lunar 3rd March, or at a harvest celebration, people gather at a grain-sunning ground or a terrace on hillside. Two thick, long bamboo poles are put on the ground, and four thinner bamboo poles placed on them.

One group of people, responsible for the thinner bamboo poles, sit, squat or stand and strike thick poles with thinner poles or slide the thinner over the thick to produce rhythms. The other group are dancers, and they spring up and down agilely at the moment when the poles open or close, and should also be graceful and natural.

When one and another pair of dancers jump out of the poles, the pole holders will hail "hey, he-hey" loudly. Hence the name Bamboo Pole dance or Firewood Chopping dance. 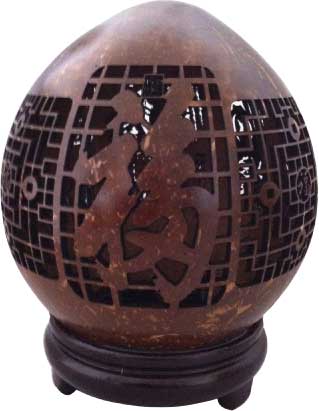 People have fashioned coconut shells, husk fibers and woods into different things for thousands of years, and coconut carving is a highlight of Hainan handicrafts. Coconut wine cups came to light in the early Tang Dynasty (618 – 907 CE) and carved coconut items became tributes to the emperors during the Ming and Qing dynasties (1368 - 1644 CE).
Hainan coconut carvings are handicrafts made mostly from coconut shells. They appear in different shapes and colors, with unique Hainan characteristics.
There are various means to carve a coconut shell, plane relief carving, stereoscopic relief carving, reversible pattern relief carving, as well as shell carvings. You can find more than 300 different kinds of carved coconut  products, such as tableware, tea sets, wine sets, smoking sets, vases, and various hanging and standing screens. They are uniquely designed and easy to use. 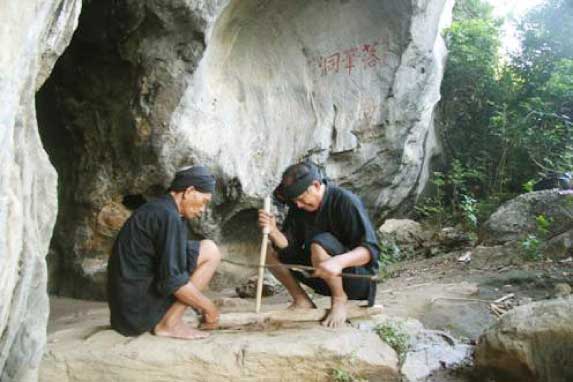 The technique of drilling wood to make fire is practiced throughout the gathering places of the Li ethnic group on Hainan Island.
According to Chinese legend, in ancient times people lived on fruits, berries, and uncooked mussels and clams - things which upset stomachs and caused illness. Then a sage appeared who drilled with sticks into wood and produced fire that was used to cook food. People were delighted and made him ruler of the world, calling him the Drill Man.
To make fire, the Li people use a fire-by-friction technique called the bowdrill. 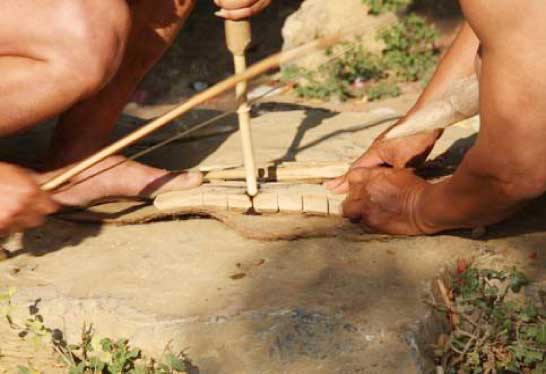 A piece of wood (called a baseboard) is drilled into by a wooden rod (the drill). The drill is rotated one way then the other by a back and forth movement of a bow made from another length of wood and a fiber string which is turned around the drill (see the photos). The hard, downward pressure and the turning causes the drilling to produce a fine, charred powder from the baseboard.
Once there is enough, the speed and pressure of the drill is increased, and the friction heats the powder to a high enough temperature to ignite it into a glowing coal or ember. This ember is put into fibers of dried banana trees, cotton fibers, dried grasses or other inflammable materials and blown gently into life as a fire.
Share
Facebook
Twitter
Pinterest
WhatsApp
Previous articleHostels in Hainan, Wenchang Coconut Grove Herton Seaview Hotel
Next articleFlights to Sanya, Haikou Hainan Island
RELATED ARTICLES
Business News

Things to do in Sanya, Binglang River Countryside Sanya Hainan