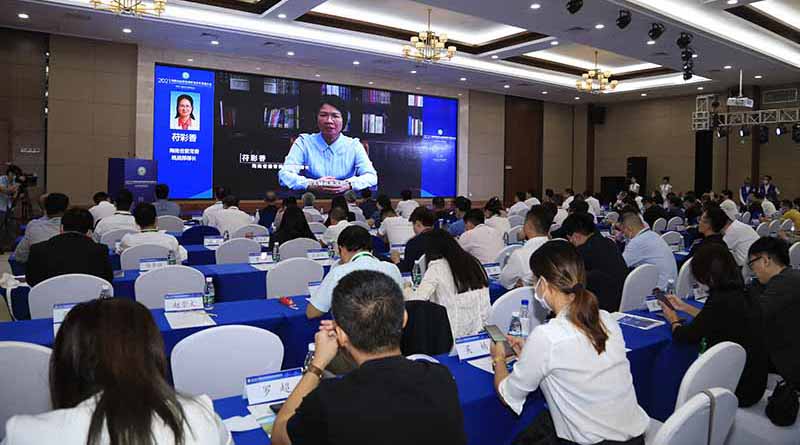 With a theme of “Opportunities and Challenges on the Road of Innovation”, the conference was attended by representatives of youth organizations from the United Kingdom, Australia, New Zealand, Malaysia, Thailand, and Indonesia, and more than 200 people from 20 provinces, municipalities and autonomous regions including Hong Kong and Macau.

Participants from overseas Chinese communities and overseas students studying abroad, through online and offline methods contributed through a series of activities such as themed forums, project roadshows and presentations.

The opening ceremony of the conference was presided over by Chen Jianjiao, vice minister of the United Front Work Department of the Hainan Provincial Party Committee and director of the Provincial Overseas Chinese Affairs Office.

Guan Yuehui, director of the European and American Student Association (Chinese Scholars Association), member of the Standing Committee of the Youth Committee of the Chinese Federation of Returned Overseas Chinese, and President of the Hainan Association of Returned Overseas Students, spoke as the representative of the overseas students, and Luo Changying, the head of the Youth League of the Malaysian Hainan Association and representatives of overseas Chinese youth spoke online.

Hainan is an important province for overseas Chinese. There are more than 3.9 million people from Hong Kong, Macao and Taiwan and overseas Chinese who are distributed in nearly 60 countries and regions around the world. With the gradual advancement of the construction of the Hainan Free Trade Port, more and more talents have gradually returned to Hainan, including talents who have returned from studying abroad as well as children of Chinese living overseas.

It is hoped that by attracting outstanding young overseas Chinese, returned overseas students, representatives of scientific research institutes and high-tech enterprises to participate in the conference, the conference will gather talents and technologies from at home and abroad to build a platform for the return of young overseas Chinese talents to build their homes, and build the world’s youth to focus on Hainan.

At the same time, it aims to make full use of the favourable opportunities of the Hainan Free Trade Port to publicize relevant policies and the advantages of the “test first” system, and promote the development and cooperation of Hainan’s high-tech industries around Hainan’s modern industrial system focusing on “3+1” leading industries.