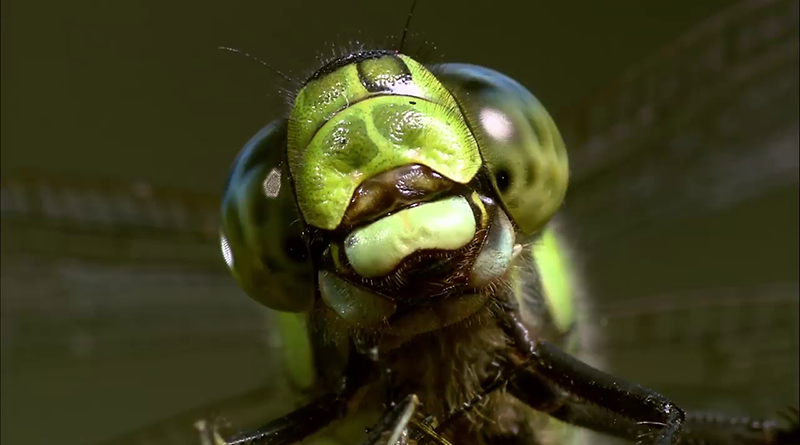 Hunting from the air is one of the most complex feats of evolution there is. Navigating the world in all three dimensions while out manoeuvring prey that have evolved similarly impressive escape tactics is no small feat.

Dragonflies have a hunting success rate that pushes 100%.

Dragonflies belong to one of the oldest insect orders, the odonata (meaning toothed ones in Greek), which have been around for close to 320 million years, and their morphology has remained mostly unchanged throughout all this time.

Their size however, has changed dramatically.

Ancient dragonflies were giants compared to the ones that exist today.

The only difference between extinct and existing dragonflies is their size. Some Palaeozoic species were known to have wing spans exceeding 70cm while the largest existing species usually don’t exceed a wingspan of 16 cm.

Dragonflies’ eggs must be laid in water so they usually feed on small flying insects that inhabit wetland areas, and they hunt and eat them in mid-flight.

Dragonflies possess some of the most unique and spectacular flight adaptations of any animal.

Most winged insects have what’s known as indirect flight muscles attached to the walls of the thorax, making the thorax deform as the muscles expand and contract which in turn causes the flapping motion of the wings.

Dragonflies on the other hand, have what’s known as “direct flight muscles”, these are individual muscles that attach directly to each wing allowing dragonflies to move and direct each of their 4 wings independently, in all three axis.

This gives them flight precision and agility that is unparalleled by most insects with indirect flight muscles.

Thanks to this direct control, dragonflies are one of the few insects that can propel themselves in all six directions, up, down, left, right, forwards and even backwards.

Dragonflies can tilt their bodies up to 90 degrees for backwards flight, a manoeuvre that is almost impossible for any other animal except a few small types of flys and the hummingbird.

Dragonflies have a small pigmented spot called a pterostigma on the leading edge of the wing that’s heavier than the rest of the wing and acts as a counterweight.

Without this counterbalance, the outer edge of the wing would be prone to flapping and feathering vibrations at high speeds which would hinder the dragonfly’s flight.

The pterostigma allows the dragonfly to achieve up to 10% – 25% higher flight speeds than they would otherwise be able to achieve.

Additionally, their wings are not flat, they’re corrugated which makes the wings more efficient from a structural perspective, preventing the wing from warping or deforming at high speeds.

Their compound eyes are the largest in the insect kingdom comprising of over 30,000 ommatidia, which are like mini telescopes that detect light from whichever direction they are pointed.

Dragonflies do not have the same visual acuity as a human being or a bird, but are much more sensitive to movement than we are.

A prey target in the distance will rarely span more than one degree across their field of vision before they decide to pursue it, which means that their brain is capable of detecting and processing movement incredibly quickly.

It’s not just the wings or the eyes that make the dragonfly so successful, but its brain.

The dragonfly’s brain uses a highly optimised hunting strategy that allows it to predict where the prey is going, and to quickly move to intercept it.

Between birds and insects, there are two main strategies used to intercept prey, tracking and interception, and of the two, interception is by far the most difficult.

Tracking involves maintaining the target in the same spot in their field of vision and accelerating towards them. Their advantage in speed allows them to catch their prey.

With interception, the dragonfly flies on an intercepting path towards where they predict the prey will be. The locations and speeds of the dragonfly and prey must be processed together to make the prediction.

When predicted accurately, it means the dragonfly doesn’t have to rely on an absolute speed advantage, which can help save power and energy.

Interception in humans is a learned behaviour, in dragonflies however, it’s believed that it’s hardwired into their nervous system and motor system directly.

Studies have shown that dragonflies adjust their heads in near synchrony with their prey as they hunt.

The head movements are so perfect that it has been hypothesised that it is not reactionary, but also based on predictions.

All of this mind and body integration has given the dragonfly the best hunting record researchers have ever found.

Dragonflies typically hunt any insect the same size or smaller than their own head, like bees, flys, mosquitoes, moths or gnats. Larger species will even catch and eat other dragonflies.

In 2012, researchers at Harvard found that dragonflies caught 95% of the prey that they chased. This is impressive for any animal, let alone a flying one.

So the next time you’re out wandering down a Hainan country lane and spot a dragonfly, take a minute to appreciate what a perfectly evolved hunting machine it is.

Family fun at the Hainan Tourism Carnival this weekend