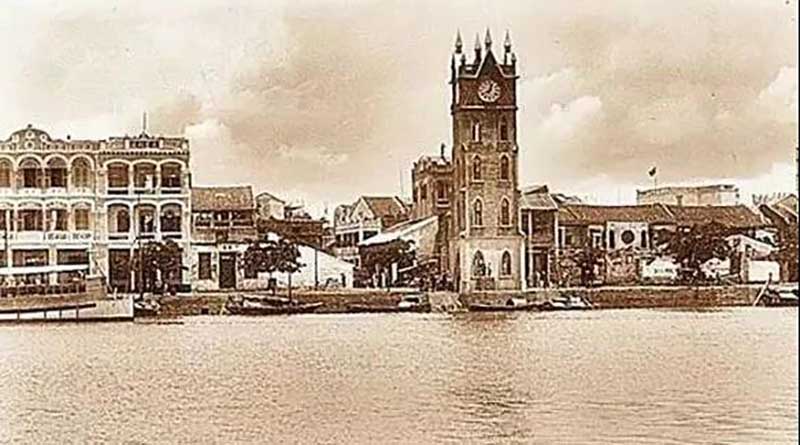 The Haikou Bell Tower is located on Changdi Road in the northern part of the old downtown area. It’s one of the most famous landmarks in the capital.

The tower stands across from Old Town Haikou. It faces the Haidian river to the north and Zhongshan road to the south.

The original Haikou Bell Tower was built in the 18th year of the Republic of China (1929). It was moved once and rebuilt but the original structure remains unchanged.

It’s a six-storey structure with a height of 27 meters and the floor space covers around 29 square meters.

Arched doors are set on the ground floor and arched windows are used on the upper floors to enhance the perspective of the clock towers height.

There are eight arrow spires of varying heights erected on the top of the tower, the four corners ones are 1.8 meters high and the four in the middle are 25 meters high

According to historical records, by the 12th year of the Republic of China (1923), Haikou had developed prosperous ports with domestic and foreign shipping routes and all the associated business activities.

Haikou had developed into a busy commercial town with more than 400 members in the Haikou General Chamber of Commerce.

There was however, no unified standard timekeeping facilities in Haikou at that time which was considered to be a great inconvenience to merchants.

In 1928, Mr. Zhou Chengmei, a local businessman proposed to raise money to build a bell tower in Haikou.

The proposal was approved by the Haikou General Chamber of Commerce and the Haikou business community including Hong Kong businessmen and overseas Hainanese donated the necessary funds for the construction of the clock tower.

At that time the tower was located at the north end of Tianhoumiao Square (now Zhongshan Heng Road).

The berthing place of ships was gradually moved from Baishamen to Chandi Road in the downtown area of Haikou, which became an important commercial center and port.

The clock is set on the fifth floor with a 2-meter diameter marble face, which was donated by Mr. Chow Wenzhi. The clocks were ordered from Germany.

On the eve of the establishment of Hainan Province in 1987, in order to improve the traffic environment the municipal government of Haikou decided to widen the Changdi road and planned to demolish the old clock tower.

Funds of 237,400 yuan were raised to rebuild a new Haikou clock tower 30 meters to the northwest of the original site (in Haikou Children’s Park at that time).

The designer of the new clock tower was Lin Zhimin, an architect from the Haikou City Architectural Design Office at the time. He designed it based on several old photos, all that was left of the old clock tower in Haikou.

After many opinions and suggestions from local citizens and overseas Chinese, he finally determined the appearance and the layout of the clock tower which is what you see today.

The architect tried to remain true to the original appearance of the clock tower when it was completed in 1929. The only difference is that now it has increased in height from 5 to 6 floors.