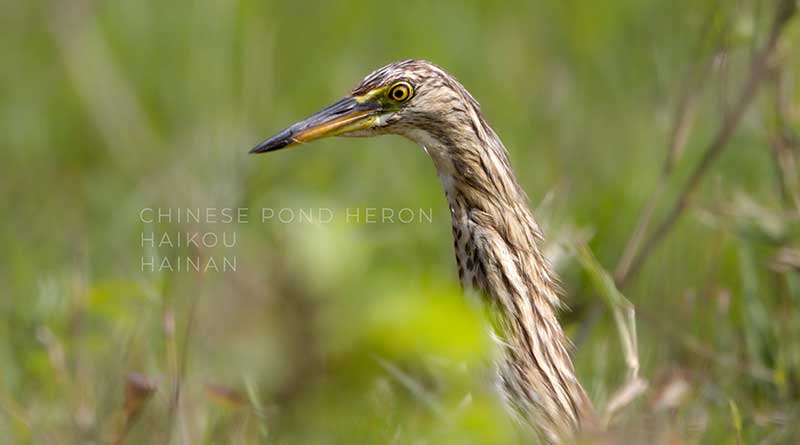 The Chinese Pond Heron (Ardeola bacchus) is an East Asian freshwater bird, and it is listed as of Least Concern (Birdlife International 2015); it breeds in Far East Russia, China, (including Hainan and Taiwan), the Korean peninsula, Japan and as far west as north Myanmar and north-east India (Assam and Manipur); northern breeders migrate south to South-East Asia in winter, (Abbas, Khan, Hussain, Mundkur, & Khan, 2016).

Chinese Pond Herons are very wary and nervous, never allowing a close approach, particularly when on the ground. When arriving at a wetland they usually survey the area for some time before descending to the ground to feed.

Whilst feeding they have a hunched stance, snatching prey with a quick darts of the head. Its food consists of insects, fish, and crustaceans. The Chinese Pond Heron often nests in mixed-species heronries and lay a clutch of 3–6 blue-green eggs.

They are extremely elusive, for example, on several occasions when it flew more than 300 metres it could not be found again, even though observers were confident that they knew the spot at which it had settled.

The legs and toes are bright yellow. The basal portion (two-thirds) of the bill is bright yellow with a black tip. The head, neck and breast are mostly a dark reddish-brown colour. The remainder of the plumage, including the whole of the wings and tail above and below are white.

All the dark-pigmented feathers are long, loose, almost hair-like, standing proud from the body giving the bird an almost untidy, shaggy look.

The Chinese Pond-Heron breeds in the summer, mainly from the extreme north-eastern corner of the Indian subcontinent, throughout eastern China and northern parts of South-East Asia, the species is common and expanding its range in China.

The male Chinese Pond-heron, during breeding season, has slaty-black mantle and scapulars. Head, neck and breast are dark wine-brown with a slaty patch in lower breast. It has white wings and belly. In summer, legs and feet are pinkish. Bill is yellow with black tip, pale blue on the base of the upper mandible, and yellow lores. Eyes are yellow too.

The Chinese Pond heron is common sight around the wetlands of Haikou.

Related article: Sharp-Tailed Sandpipers migrate to Hainan for the winter