The Hainan Gibbon is the world's rarest primate 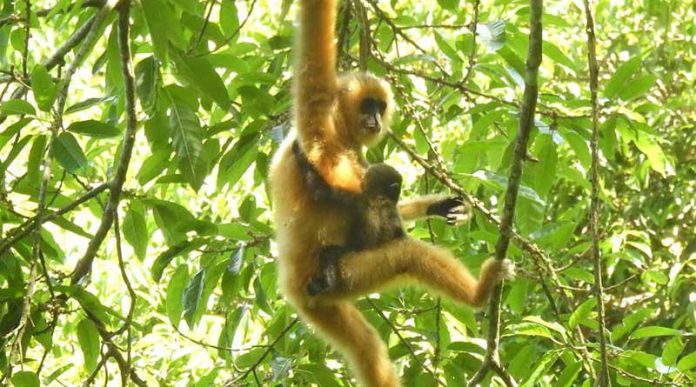 Staff members of the park administration spotted the new born gibbon on Jan 24th during routine daily monitoring, and after two months of observation, it was confirmed that the gibbon population has increased to 36 in five families in Hainan Province.

“The baby has been named ‘Yuannan’ and it is in good condition,” said Qi Xuming, an official with the park administration, adding that the new born has been seen separate from its mother at close range.

The Hainan gibbon, the world’s rarest primate, has been listed as critically endangered by the International Union for Conservation of Nature.

Numbering over 2,000 in the 1950s, the Hainan gibbons’ population plunged to about seven in the 1980s, due to excessive hunting and lumbering which pushed them to the brink of extinction.

Hainan gibbons typically live in rainforest trees over 10 meters tall. They have long arms and legs but no tail, and rarely set foot on the ground, making captive breeding difficult.

It is worth mentioning that at the beginning of last year, Hainan gibbons added 2 baby apes, also from group D.

Aquaculture tourism platform arrives in Hainan – What is Aquaculture?