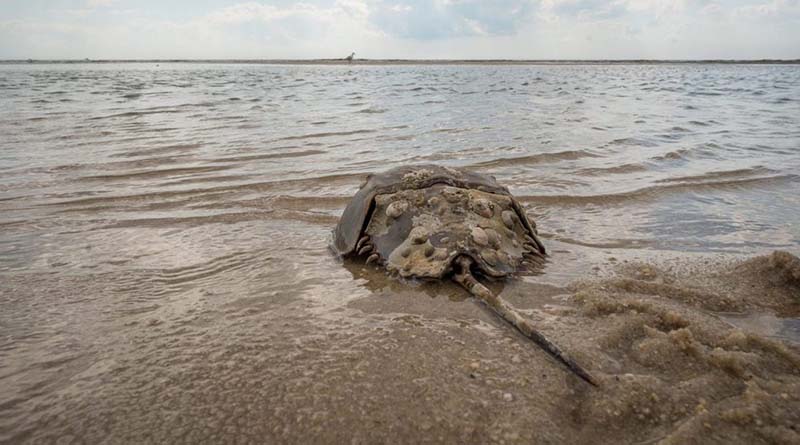 On December 16 the Hainan Danzhou Maritime Police Bureau seized a suspect for harming precious and endangered wild animals. The animal in question was the Chinese horseshoe crab “tachypleus tridentatus”, a nationally protected animal in China.

The maritime police officers and local department personnel released the crabs into nearby waters.

In March 2019, the International Union for Conservation of Nature (IUCN) listed the Chinese horseshoe crab (also known as the tri-spine horseshoe crab) as endangered.

It is similar to other lists such as the IUCN list which is more commonly known worldwide.

Class I designates some of the most vulnerable and critically endangered species in China, such as the Hainan Gibbon and Giant Panda.

In China, class II of the protect species list covers animals such as the red panda, brown bear and red deer.

Class I protection prohibits hunting, killing, smuggling or trading the protected animals with jail sentences up to 10 years for those caught.

Not actually a crab

Despite their misleading name, horseshoe crabs do not share any close relatives with crabs. They share more genetics with spiders than they do with crabs. Researchers place them in the subphylum Chelicerata, along with spiders, scorpions, sea spiders and extinct trilobites.

Like the other species, females grow larger than males. The largest females of the tridentatus horseshoe crab can be as much as 79.5 cm (31.3 in) long, including their tail.

They are found in coastal and brackish waters.

Like other species of horseshoe crabs, they are omnivores and feed on molluscs, worms, other benthic invertebrates and algae.

Horseshoe crabs are under threat

The 450 – million year old horseshoe crabs that predate dinosaurs are now endangered and are mostly under threat from factors such as habitat loss and overharvesting.

In the 1950s, US scientists discovered that the blue blood of the horseshoe crab clots when it comes into contact with bacterial endotoxins. This led to the development of limulus amebocyte lysate (LAL), a processed extract of the blood used to test for bacterial contaminants during the manufacture of anything that might enter the human body, from surgical equipment to vaccinations.

Demand for LAL and the lack of better alternatives make it one of the most expensive liquids in the world, with an oft-cited price tag of US $60,000 per gallon (4.55 litres).

To collect the blood of horseshoe crabs, pharmaceutical factories capture them, extract their blood and then release them back to nature. It is estimated that as many as 30 percent die after being bled, according to a National Geographic report quoting a 2010 study on the industry in the US.

Gravid females are the target of capture throughout its range by artisanal fisheries as a food source in the Philippines, Indonesia and Sabah, Malaysia.

The Bajau Laut, nomadic sea-farers along the south east coast of Sabah consume horseshoe crabs as a component of their diets.

They are specialist marine hunter-gatherers who make a living from freediving and represent one of the most widely dispersed Indigenous groups in Southeast Asia.

They comprise a total population of approximately 1.1 million, with around 200,000 living in the islands of eastern Indonesia, 347,000 in Sabah, Malaysia and 564,000 in the Philippines. Whilst such artisanal fisheries are low technology in nature, the impact of targeting gravid females can be high and have considerable negative impact, particularly when small or already depleted populations are involved.

Reclamation and related activities pose a considerable threat to horseshoe crab populations, through destruction or degradation of all lifes stage habitats.

Sand or gravel extraction can not only have a biological impact, leading to a change in benthic communities, it can also change a stable area of seabed into an area of erosion and if undertaken where currents are not strong, this can lead to the preferential erosion and deposition of fine sediments from surrounding areas through a winnowing effect, to replace the sometimes coarser sediment that has been extracted, which has a detrimental affect on their natural habitat.

Share
Facebook
Twitter
Pinterest
WhatsApp
Previous articleThree-month art exhibition bonanza set to bring in the new year
Next articleLooking for something different for your next Hainan break? Then this may be for you!
RELATED ARTICLES
All
Expats in Haikou

Hainan launches center for the study and protection of gibbons in...