The history of fireworks and their traditional uses in China 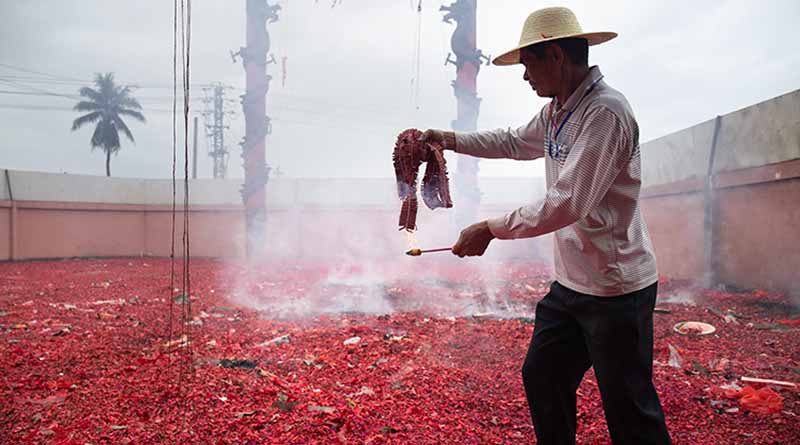 The earliest “firecrackers” in China date back to between 202 BCE – 220 AD during the Han Dynasty. In these times, Chinese people would roast bamboo in fires, whereby hollow pockets in the bamboo would expand and eventually explode, producing a loud bang.

A few hundred years later during the Tang dynasty, a Chinese alchemist accidentally discovered an exploding black powder while trying to make an elixir of life. He had combined saltpeter (potassium nitrate), sulfur and charcoal to make what we now know as gunpowder.

Gunpowder is one of the four great inventions to come from China alongside papermaking, printing and the compass.

This newly discovered exploding powder was then packed into bamboo tubes and thrown into fires to create an even louder blast.

It wasn’t until later during the Song Dynasty (960-1279), that gunpowder was used to manufacture fireworks by packing it into tubes of rolled paper and adding a tissue paper fuse, making something that resembled the fireworks we know today.

Traditionally, Chinese people believed that fireworks could ward off evil spirits and because of this, they are a major custom around public holidays, weddings, funerals, and other traditional ceremonies.

One of the more popular legends as to why Chinese people believe fireworks ward off evil spirits is the story of a monster called “Nian”.

The name “Nian” also means “Year” in Chinese which is appropriate as the monster was said to come along on the night of Chinese New Year’s Eve to eat people and destroy their crops.

Eventually, people figured out that the monster feared fire and loud sounds. They burned bamboo in the fires untill they exploded causing a loud noise and from then on fireworks in their simplest form were created and became a tradition of Chinese New Year.

There are many sources citing a number of tales as to the identity of the hero responsible for scaring away the New Year’s monster. The only thing they all have in common is that they all say that Nian was scared of loud noises, bright lights, and the color red.

As fireworks produce such effects as fire, sparks, sound, and smoke when they are set off, they naturally became the ideal product for celebrations.

Alongside the holidays and celebrations mentioned earlier, fireworks are also used during a number of not-so-common celebrations, such as moving into a new house, opening a new business and at the start and end of projects.

The most commonly used firework in China is the firecracker, a string of 100’s sometimes 1,000’s of small paper cylinders packed with explosives. The firecrackers are lit at one end creating a barrage of sound, sparks and smoke.

In October 2007, a 20km (12.4 miles) string of firecrackers was lit between the Dayao town and Liuyan city in Hunan province. The feat was performed by one of China’s largest firework producers as a marketing stunt and the whole spectacle lasted 68 minutes and cost 800,000 RMB.

According to the Guinness World Records on 19 October 2002, an unbroken line of firecrackers was detonated in Sueca, Valencia, Spain, measuring 11 km (6.83 miles) long.

Fireworks around the world

Fireworks are used differently around the world. For example, in the USA, on the 4th of July each year, Americans let off fireworks to celebrate their Independence from the British Empire in 1776.

In the UK they are used on the 5th November to celebrate the failed gunpowder plot when Guy Fawkes failed to blow up the Houses of Parliament in 1605.

In Peru, when the clock strikes midnight on Christmas day, millions of Peruvians let off fireworks, illuminating the midnight sky celebrating Christmas.

During August in Japan, Japanese people celebrate their historic heritage through fireworks, a tradition that has taken place since the 18th century.

Fireworks are launched at Eid Al Adha, the Muslim celebration signaling the end of Ramadan, and Dubai is said to host one of the best firework displays.

In 1486, fireworks were used to mark the royal wedding day of King Henry VII. Two centuries later, they were again used at the coronation celebration of King James II.

According to legend, Czar Peter the Great ordered an extravagant firework display to honor the birth of his son. This firework show lasted about 5 hours.

Related article: Fireworks will be banned in these areas of Haikou over Spring Festival

Where to buy your zongzi in Haikou

May Day celebrations, China and around the world