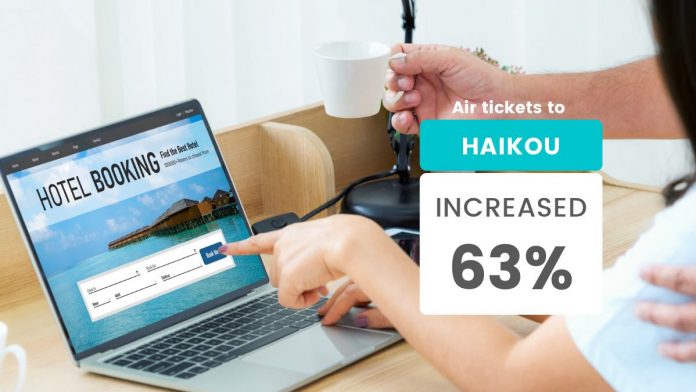 Eleven cities and counties in Hainan, including Haikou, Sanya, Danzhou and Wenchang, have adjusted their epidemic prevention and control management measures to allow easier access to Hainan Province.

They will no longer implement region-specific differentiated management for people arriving from outside the province, according to notices issued on Monday and Tuesday.

Many see the changes as lifting restrictions on COVID-19 prevention and control and a positive sign welcoming more visitors to the tropical island during the winter.

According to Qunar, a domestic online travel agency, within one hour after the notice about Sanya was released on Tuesday, the search volume for inbound air tickets of the city increased by 1.8 times compared with the same period the previous day. Ticket sales increased by 3.3 times and Sanya hotel bookings tripled.

For Haikou, airline bookings to the city doubled compared with the previous day, and ticket bookings from Haikou increased by 40 percent.

According to Tongcheng Travel Holdings, the number of air tickets from across the country to Haikou on Monday increased by 63 percent compared with last Monday. Air ticket sales to Sanya rose 55 percent.

In addition, hotel bookings for Hainan province went up 21 percent from the same period last week.

According to the Hainan Health Commission, as of Monday, a total of 1,309 cases of COVID infection have been reported in the province since November.

The provincial government said it will remain vigilant on epidemic prevention.

“This round of the infections in Hainan has the largest number of imported cases since the COVID-19 outbreak,” said Du Jianwei of the provincial COVID-19 prevention and control headquarters at a news conference on Friday.

Because of the continued high-level of domestic epidemic cases, the transmission across provinces and regions and the increase in the number of retirees during winter in Hainan, the risk of defending externally against importation continues to increase, he said.

Those who come or return to the province are advised to do self-monitoring for three days following arrival, and to avoid social gatherings and crowded places. If they develop symptoms such as fever, dry cough or loss of taste or smell, they should seek medical treatment, according to the Hainan Provincial Center for Disease Control and Prevention.

Related article: latest COVID Updates in Hainan Province from 00:00 to 24:00 on December 5