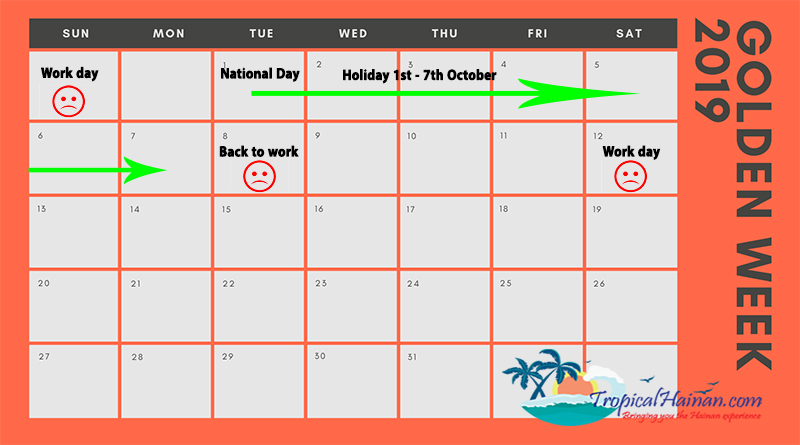 What is Golden Week? Where to go? How many days do I have off work? Information about China National day 2019 and Golden Week below.

What is Golden Week?

Golden Week is the week-long holiday after the celebrations on National day. It’s a time for Chinese citizens to take some R&R, travel, celebrate and visit family. It’s also one of the busiest weeks for shopping, with many retailers offering huge discounts.

This year marks the 70th anniversary of the founding of the People’s Republic of China.

The celebrations commence on the first day of October when the Chinese flag is raised at sunrise on Tian’anmen Square in Beijing, this is followed by a series of large military parades and festivals across the country.

Chinese Golden Week is also one of the largest migrations of Chinese Tourists. Many families across China choose to travel during this holiday as it’s the largest legal public holiday of the year. Popular destinations such as the Forbidden City in Beijing, the Terracotta Warriors in Xi’an, Da dong hai in Sanya are all going to be busy.

If you are planning to travel during the holiday and visit popular Chinese tourist destinations then it’s best to book your tickets and hotel as soon as possible, as they usually sell out quickly and prices can be much higher closer to the time.

Where to go in Hainan?

We have put together a list of places you may want to visit in Hainan.

Golden week is from 1st – 7th October. Make up days for work are on the 29th September and 12th October.

Share
Facebook
Twitter
Pinterest
WhatsApp
Previous article
Haikou bus lanes, what you need to know on how to use them correctly
Next article
29 measures to optimise business environment in Hainan, plus time frames & responsible units
RELATED ARTICLES
All
Holidays and festivals

Glamping, a combination of Glamorous and Camping, is where luxury meets...