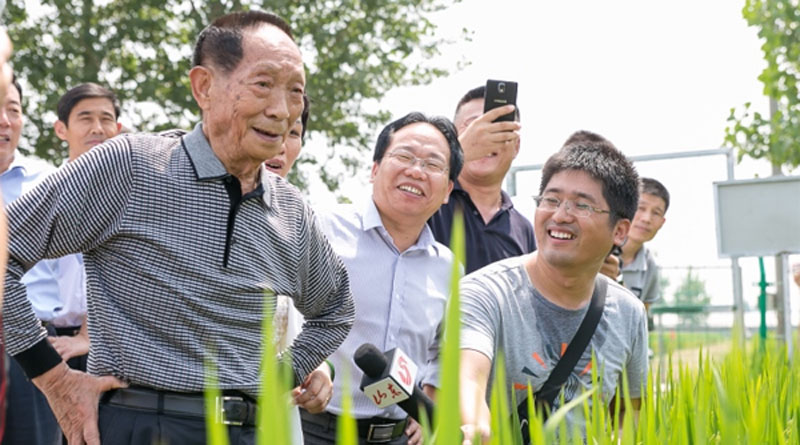 Nature, wildlife & the environment
December 21, 2016November 11, 2018 Patrick 951 Views 0 Comments
YUAN Longping, China’s renowned rice scientist, is leading a research to cultivate new strains of high yield “sea rice.” The research team plans to spend three years developing a breed that can withstand water with a salinity of up to 0.8 percent, with a yield over 300 kilograms per mu (about 665 square meters), said Yuan, known as the “father of hybrid rice,” during a seminar in Sanya City in Hainan Province. “Over half of the world’s population relies on rice as their staple food, while the proportion is over 60 percent in China,” Yuan said, adding that China has more than 1 billion mu of saline-alkaline soil, and it will be of great significance to convert such soil into arable land by developing sea rice with a high salinity tolerance. Using 100 million mu of land to grow sea rice, the country could produce an extra of 30 billion kg of rice and feed an extra 80 million people. Sea rice is sometimes found in saline-alkaline soil where rivers join the sea. The plant is resistant to pests, diseases, salt and alkali, and does not need fertilizer. Currently, the most advanced sea rice breed in China has a yield of 400kg per mu, but can only be grown in water with salinity less than 0.3 percent. A sea-rice research center, with Yuan as the chief scientist, was established in October in Qingdao, Shandong Province. With dozens of breeds of sea rice brought in from worldwide, researchers will use gene sequencing technology to cultivate new strains. For decades, scientists led by Yuan have worked on new approaches to significantly increase rice yields. Source: http://www.shanghaidaily.com