Hainan cruise industry under pressure from the epidemic 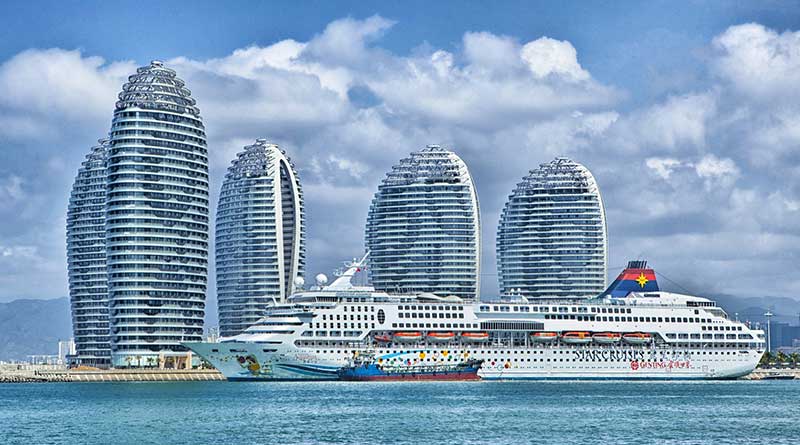 Introduced in 1998, the Sea Princess was built by Fincantieri for Princess Cruises. The 77,500 gross ton cruise ship sailed for Princess and briefly for P&O Cruises and had been operating mostly in Australia before being idled by the pandemic. In September 2020, Princess Cruises announced that they were selling the ship along with her sister ship the Sun Princess.

The successful handover of the 2,222 berth vessel took place in Manila. The process which was mainly remote due to Covid-19 travel restrictions and preventative measures, involved close cooperation between V.Ships Leisure’s shore side team, Officers and Crew, Sanya International Cruise Development, Princess Cruises and the relevant authorities.

The handover also provided the new operator with access to V.Ships Leisure’s significant global crew network enabling the mobilisation of crew, even during the pandemic.

According to Chinanews.com on March 20th, in an emotional statement, Jiang Zhigang, chairman of Sanya International Cruise Development Co., Ltd., said that “according to the original epidemic situation, we expected that the cruise ship would be put into operation after half a year, but the development of the epidemic situation has far exceeded expectations, the company has invested more than 200 million yuan.”

With thousands of guest rooms, even just maintaining the most basic normal state of operations requires a lot of manpower and fuel costs.

Sanya International Cruise Development Co., Ltd. was established in 2015. It is a local enterprise focusing on developing the cruise economy in Hainan and helping the construction of the Hainan Free Trade Port.

After more than six years of development, it planned to start a new journey with the introduction of the first international luxury cruise ship, but it was suspended due to the continuation of the epidemic.

As a key industry encouraged by the Hainan Free Trade Port, the cruise industry in Hainan, which had been developing well before the epidemic, was almost completely suspended.

At present, only the cruise ship Xisha has resumed operations.

Xiang Yu, Director of the Cruise and Yacht Industry Division of the Sanya Central Business District Administration, reported that the epidemic has had a huge impact on the cruise consumer market.

Due to the relatively simple revenue model of domestic cruise tourism, the suspension of sailing means that cruise companies will not only lose their main business income but are also faced with huge cost consumption.

Yao Dongwei, Secretary of the Board of Directors of the Hainan Shitian Cruise Group Co., Ltd., told reporters that Shitian Cruises signed a strategic cooperation agreement with the Sanya Municipal Government in March 2020, and planned to set up its self-designed, first five-star red flag luxury cruise ship at the Sanya Cruise Home Port for operation.

“After the outbreak, the entire plan, including construction, financing, and operations, was disrupted.” Yao Dongwei, Secretary of the Board of Directors of the Hainan Shitian Cruise Group Co., Ltd.

Hainan is one of the earliest provinces in China to introduce cruise tourism and the cruise industry was gradually developing into one of Hainan’s characteristic emerging industries.

Despite the impact of the epidemic however, its development potential cannot be underestimated.

Since 2020, the Sanya Central Business District, a key free trade port park dominated by cruise ships and yachts, has attracted a large number of leading enterprises.

Xiang Yu said that this shows the confidence of the cruise line industry in Hainan.

In the past year, Hainan has introduced a number of innovative systems, including allowing Chinese-funded cruise ships to open new sea routes in Hainan.

Xiang Yu explained that these sea route refer to routes in which the cruise ship does not dock but only cruises at sea.

Xiang Yu said that Hainan’s policies, including the International Ship Registration Regulations, focus on problems that have plagued the cruise industry for many years, and are very attractive to companies.

After years of development, China has grown into the world’s second largest cruise passenger market.

The industry believes that after the epidemic is over, China’s cruise passenger flow may usher in an explosive growth. Yu Zhijun said that, during the period where the cruise tourism business is stagnant due to the epidemic, companies in the industry should reengineer their business processes, carry out talent training and government departments should make up for shortcomings in infrastructure, establish a long-term mechanism to promote industrial development, and welcome the recovery of the cruise industry.