Interesting facts and figures on Hainan’s Internet industry, May 2021 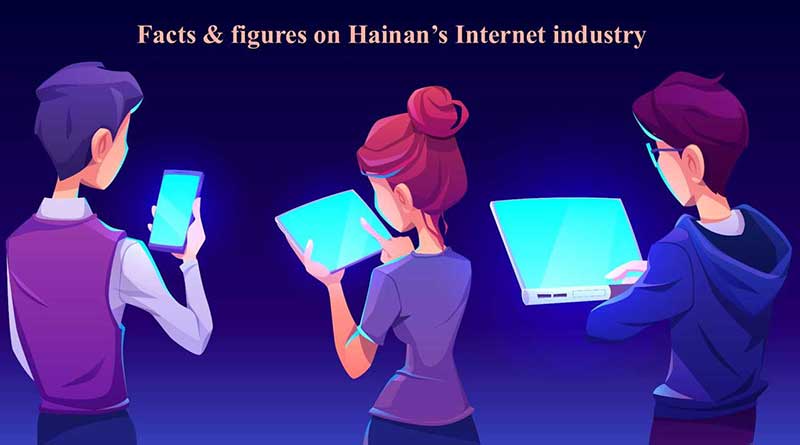 In terms of age, under 30 year olds comprise the largest group, with Internet users between 19 and 24 years old accounting for 27%, the highest proportion.

In terms of education, netizens with a bachelor’s degree are the largest group, accounting for 47.4%.

In terms of occupation, students are the largest group, accounting for 19.2%.

The number of mobile phone users in Hainan Island is stable with the number of 5G users growing rapidly.

By the end of March 2021, there were 11.374 million mobile phone users, 1.97 million 5G terminal users and 3.643 million fiber access users in Hainan, accounting for 97.4 percent of the total broadband users, ranking third in China.

WeChat is the most commonly used APP

In 2020, comprehensive search engine websites ranked first among all websites, with a user coverage rate of 99.1%

Among them, WeChat has topped the list with 82.8% of mobile users.

Mobile Taobao ranked second with 50.7% and Douyin third with 48%.

Progress of 5G base station installation in Hainan exceeds the national average with the number of Internet users having reached 7.64 million.

Operation of the information and communications industry in Hainan

From January to December 2020, total revenue from the telecommunications industry in Hainan was 10.75 billion Yuan with a year-on-year growth of 2.8%.

From January to March 2021, total revenue from the industry was 2.96 billion Yuan, up 10.1% year on year, and the year-on-year growth rate was 3.6 percentage points higher than the national average level (6.5%).

In 2020, Hainan’s information and communications industry had fixed asset investment of 3.23 billion Yuan, up 4.5% year on year.

From January to March 2021, the industry had fixed asset investments of 980 million Yuan, up 58.5% year on year, 52.1 percentage points higher than the national average (6.4%), ranking 5th in the country in terms of growth.

Deployment of 5G base stations across Hainan Province

By the end of 2021 outdoor coverage of main urban areas in Haikou, Sanya and Qionghai (including Bo’ao) will be completed.

Hotspots in major urban areas of other cities and counties will be covered, and 5G application will include areas such as hospitals, schools and key tourist attractions.

At present, all cities and counties in the province have achieved full 4G network coverage. Coverage rate of 4G network and fixed-line broadband access has reached 100% in 195 townships in the province, and 100% of the 2,644 administrative villages have access to optical fiber and 4G.

Targeted fee reductions to help alleviate poverty through the Internet

Current reforms are focusing on delegation of authority, providing services, improving the review and approval system for telecommunications businesses and ensuring that the entire approval process can conducted without face to face meetings.

The time limit for review and approval has been shortened from 60 days to 8 working days and “one-stop” services for the filing of telecommunications facilities have been promoted to provide age-appropriate services.

Related article: Huawei to set up tech center for the Internet of Things in Hainan

Colleges and universities in Hainan issued notice for start of school