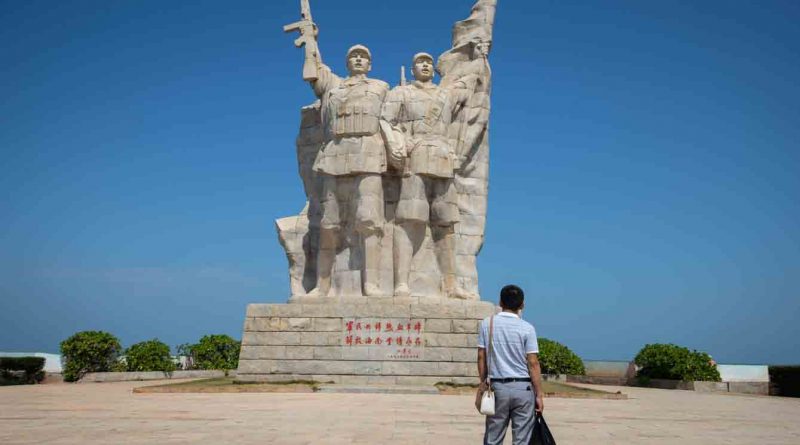 The Lingao point liberation park is situated on the most easterly point of the 71 kilometer Lingao coastline and around 11 kilometers from Lingao town.

On April 17, 1950, the 40th Army of the Fourth Field Army of the Chinese People’s Liberation Army landed at Lingao Cape to liberate Hainan. The park is built at the landing site to commemorate the soldiers of the 40th Army.

Located at the 260 acre park is the oldest lighthouse in Hainan, beautiful landscaped gardens, the memorial statue for the liberation of Hainan, a memorial exhibition hall and the 40th army martyrs memorial.

The Centennial Lighthouse is the oldest lighthouse in Hainan. It was built by the French in the Qing Dynasty (1893).

The tower is a simple steel structure with a height of 20.6 meters and a width of 1.88 meters. The top of the tower is equipped with lamps and has a range of 18 nautical miles.

For more than 100 years, the Lingao point Centennial Lighthouse has been an important navigation aid for ships entering and leaving the Qiongzhou Strait, and has enabled outstanding military achievements in the liberation of Hainan.

In 1997, the lighthouse was included in the roster of the world’s 100 historical relics and lighthouses by the International Navigational Beacon Association.

The statue has a total height of 18.9 meters and a total weight of 1600 tons. The memorial statue for the liberation of Hainan at Ling Gao point is the largest monument of revolutionary history in Hainan Province.

Alongside physical exhibitions related to the landing, there is also a vast amount of film and television materials within the multimedia sections of the hall.

The monument was designed by Shenyang Lu Xun. The design concept is composed of wooden boats, flags, waves and steps.

The monument is shaped like a ship, with a bow on the front and fluttering flags on both sides.

The general idea is that under the guidance of the war flag, the officers and soldiers crossing the sea will ride the wind and waves and move forward bravely.

The monument’s stele and flag face are stacked in three layers, meaning that the warriors forcibly landed three times.

Entrance to the park is free of charge and allow yourself a couple of hours to get around and see everything. The park is open daily from  8 am – 5 pm.

Just by the park entrance there’s a small beach and the sea is calm and clean enough to swim in, so it might be worth taking beach wear too. Stock up on plenty of water and snacks as there are no shops in the park.

Travel to the park

If you aren’t driving then the best way to get to the park would be to take the train from Haikou to Lingao south station then a taxi to the park. From the train station in Lingao to the park it’s a 20 – 30 minute cab ride.

The train from Haikou east station to Lingao south takes around 35 minutes and costs around 20-35 yuan. The cab ride to the park should be no more than around 50 yuan.

If you are interested in military history in Hainan then the Lingao point liberation park is definitely worth a visit.